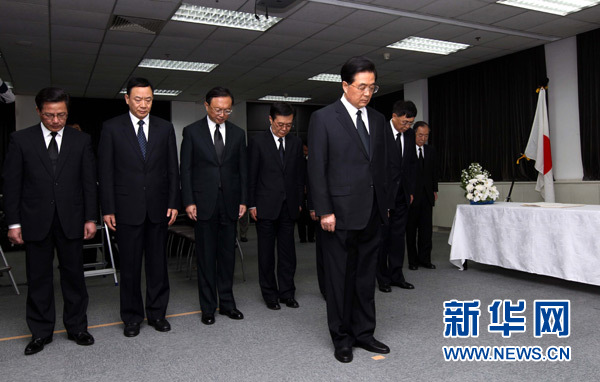 Hu Jintao, President of PRC, went to Japanese embassy to condole on Mar.18th

The strongest earthquake hit Japan, which has been China’s most hated rival for almost one hundred years; while Gaddafi, one of “the old friends of Chinese people”, quelled the riot with violence, which brought himself the UN’s determination of sanctions. Through China’s different responses in these cases, we could get some implication in China’s game playing among the international relations.

The Chinese Communist Party likes to use the words “Leftist” and “Rightist” to describe people’s political orientation. Leftist indicates a preference of Socialism while Rightist means a tendency of Capitalism. Chinese people once believed that dictatorship of proletariat and planned economy, which are exactly the content of Leftist line, are the symbols of real Socialism. In Chairman Mao’s era, the Ultra-Leftist Line was proved as a line that would have wrecked the country, because it inhibited the vitality of politic and economy revolutionaries. However, Rightist will threat the fundamental of the Chinese Communist Party’s cornerstone for governance. Since Deng Xiaoping came into power, the central government has kept pursuing a balance between Leftist and Rightist. They need the Rightist Lines to help the growth of market economy and people’s living quality. Also, they control the over-heated growth of Rightist Lines to ensure their ruling status.

In the recent two decades, the central government viewed the growth of economy as the most important thing. From the economy perspective, China joined the WTO and is playing a more and more important role in international trade; at the level of politics, China gave up the old way to distinguish allies and enemies by ideology; from the view of culture, China is now emphasizing “cooperation, mutual benefit and communication” in education instead of the old content of class conflicts or anti-aggression.

The cases of Japan directly show this kind of change. The relationship between China and Japan has long been a sensitive issue. From all perspectives of social life, Chinese government alerts its people to “be vigilant of Japanese aggressors”. When the public’s anger about prices reached a dangerous level in last year, the government used the issue of Diaoyu Islands to transfer people’s hostility towards Japan. When the strong earthquake hit Japan, historical inertia sonly raise a debate on whether to give aid to Japan or not on the internet. The spirit of humanism beat the “Japan threat”. On a survey done by Sina.com, 88% responders agreed to “give aid to Japan immediately”. China’s rescue team became the first foreign team that entered Japan to help rescue. On Mar. 18th, Hu Jintao went to Japanese embassy to condole the Japanese people.

In the case of Libya, China’s changes are also proved. A bunch of small countries in Asia, Africa and Latin America, including Libya, are viewed as important strategic partners by Chinese government in recent years. They share the same imagining enemy: the USA, and the capitalism world it represents. However, when Gaddafi, the old friend of Chinese people, chose to aim at the public with guns, China made its decision, following the universal value. Though China didn’t participate the force sanctions towards Libya, it showed its opposition towards Gaddafi government’s atrocity.

From the recent responses China has made on the international affairs, we can easily feel that China is giving up its old thought of Conspiracy Theory and Threat Theory. It is now embracing the international relations with a more equal and positive attitude. China’s changes in political lines may lead to a real worldwide win-win situation.

Shuze Chen is a full time graduate student at SPR, Annenberg, USC. He comes from Jiangsu, China. He did his undergraduate in Advertising, Nanjing University.
View all posts by ShuzeChen →
This entry was posted in Uncategorized. Bookmark the permalink.